This is the first of a series of posts, with what I recommend as the smallest skillset to do PI profitably.  There other things you can (and probably should) do, but it's the basics of raw extraction and one level of processing; in both High and Low Security systems.


This post walks through:
Future posts will walk through:


Looking for something to sell

First of all; lets look at the market for raw extraction and first level processed items.  Open your market browser  and look for Manufacture & Research; Materials; Planetary Materials; Raw Materials.
150 units of Raw Material are converted to 1 unit of Processed Material (in 'batches' of 3000 raw units to 20 processed units).

I like to extract what is profitable; on the planets that I have access to;  Some players have an end product in mind; and will build to that.  Three things to consider.
Against my better judgment, I am going to point out some possible items to sell.  They are right for me where I am as of writing this post.  I can not stress enough; do your own pricing for 'where' and 'when' you are.  I don't mean just Jita pricing from two months ago.  I will talk more about pricing later; but for the time being; you can just look at the in game market groups - by clicking on the items group (i.e. 'Processed Materials' in the above image) and ensuring that groups are selected.

A look at PI taxes


In High security systems; chose high market prices over high availability ; at "10% tax" Raw material has an export tax of 0.5 ISK/unit ; and Processed Materials have an export tax of 50 ISK/unit; paid when lifted off planet into the customs office.  Many high availability resources sell for around those prices so chose low availability high profit items instead.  For 10% customs offices I would recommend working towards (after export tax) 400 ISK/unit items (eg Electrolytes) instead of 5 ISK/unit items (eg Biofuels)

If you look hard enough; you can find lower taxing systems.  Some (including those that I belong to) corporations and alliances offer this (yes we are recruiting).  Even some pirate corps offer both protection and systems with cheap customs offices (eg Basgerin and their pirates). On a 3% tax customs office; you are only paying 0.15 ISK/unit for Raw and 15 ISK/unit for Processed material; making a huge difference to profit margins. 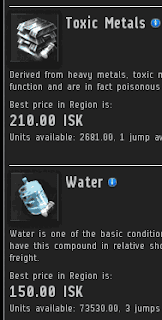 You will need to do your own sums; but if you have a low tax customs office; you can profitably chose a middle priced abundant resource to extract and process.  For example, if you have 4 times the availability of toxic metals or water vs the previous screenshot of biomass; with tax being far less important; you may choose the easier to extract item.

As a crude measure of profit when doing extraction and one level of processing; profit = (sale price - export tax) * units processed.  Chose a mix of higher sale price, lower tax and higher availability of raw material.


The lower the security of a system; the better the resource availability (at least until those pesky players drain a planet dry);  There are better resources in 0.5 than 1.0; 0.1 than 0.4; so whatever your preference (High security; Low security or Null) lower has better resources than higher.

Of course low and especially null have ... players that would like to be acquainted with the inside of your ship and pod, and have the can opener to find it.  My experience on null is mostly from reading but I did see a couple of null sec planets and liked what I saw; at least until I tripped on that can opener.

Hisec PI a mugs game but not why you think

There are problems with these two Hisec pictures.

This Losec (0.3) Picture is much better.

However, even this tells only part of the picture: I am only paying 2% tax; something that is not achievable in hisec.


For today's discussion;
Each point above could have a post about it's correct treatment (eg. I rarely sell raw mats), but too keep the wordcount down; it will do

The exact amount you extract does not matter for this argument (whether you use all or some extractor heads; whether you extract for 1 hour or 14 days); the numbers still 'wash up''; all I am looking at is the proportions and prices of items.

As you can see, on this planet in hisec, on these prices, the biggest profit is from the difficult to extract Noble Metal; followed by the easy to extract, middle priced Carbon Compound.  It is unlikely that I will be extracting and selling Micro-organisms.

This is a table of profits for the same items of a lowsec planet.

As you can see, at a 10% tax rate; Losec Micro Organisms are still a loss; and Noble Metals still has the best return nearly twice as good as it's nearest competitor.

In fact; at these prices; Noble Metals has the best return at any tax rate; hardest to extract but the higher price more than makes up for it.

That said; as the tax rate goes down, the gap shrinks; from about a 40% 'lead' to a 15% lead for Noble Metals over Carbon Compounds.

Finally, where tax makes a huge difference is on pure manufacture worlds.  For example I am making Integrity Response Drones on a low tax planet.  Ignoring direct component costs, and looking only at the tax rates involved.


Import taxes are 1/2 that of export taxes.  As you can see; when I had my 10% highsec manufacturing planet; I was paying roughly 200K/drone in up front PI taxes; No that I have access to low tax words; this is reduced to roughly 40K/drone.

While losec planets and customs offices are in abundance; Low tax Player Owned Customs Offices (POCO) are in relatively short supply.  However, if you intend to seriously do Planetary Interaction; then organizing access to a cheaply taxed POCO is an important consideration.

Interbus does not mind losing their NPC CO's, and at very roughly 100M Isk, they are easy enough to put up.
Posted by Foo at 23:29 No comments:

I have been talking about and working on my planetary interaction and probably driving corp members to distraction.

I have my Hisec P4 planet working well, making Integrity response drones and import mats, manufacturing then exporting them for just under 970K each, and selling them for about 1,080K each, giving 110K profit per unit.  However I am paying 206K tax each (mix of import and export taxes) from a 10% PI world.

Roughly 500 Integrity Response Drones and I would pay for a player owned customs house.  24 per day, assume 3 toons all with PI, and a customs office 'pays' for itself in a week.  Alternatively put up a 5% customs house and encourage 6 toons to set up shop 24/7 and it has also paid for itself and made them a profit too.

So, I went hunting for a system:

I have chosen Eve Planetary Planner to give me candidate planets. 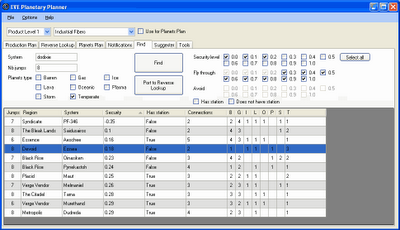 So off I went with a cheap ship with a couple of quick aligning mods, lost it (but got my pod away), realized I should not be scanning lowsec on my toon with implants, and continued my investigation on an unused alt.

What I found
The short answer is that I am not going to find what I want.  I can find good enough.

I looked at 30 Losec systems. In the regions I looked at, there are swathes of systems owned by corporations running 10% or even 15% taxes.  There are several corporations with a customs office or two offering 5%.  There is even a single temperate planet in the Devoid/Semou that has a 0.1% tax rate and a reasonable amount of Autotrophs.  It also might be bait - it is so much cheaper than any competition.  Not where I wanted to set up, I might revisit it later.

I also had a look at a nullsec system - first time there.  I was on an entirely disposable toon and ship.  As I had been told, the resources are much greater on the null sec worlds even on the borders; and I suspect would be even greater further in.

I did find a system (Sinq Laison/Basgerin) with several 3% tax and public access in.  This means that my Integrity Response Drones became 254K profit after 62K tax (instead of 110K profit after 206K tax).  24 of these per day means 6M profit / day just from a single P4 factory.  The hitch? 10M week (lets call it a 'safety levy') for the local 'security forces' (http://www.basgerin-pirate.com/).  From my limited dealings with them; they have often been out of system, are sufficiently competent to take down my Iteron, and are 'honorable' (as in didn't shoot me once I paid, and even allowed me to recover my cargo).

I have found a currently recruiting alliance of industrialists (Free to Play); with sufficient 'muscle' to keep a small patch of Losec clear of established trouble (though not random roamers).  A few 2% Customs Offices for alliance members (even better than Basgerin), though not yet enough for my requirements.  There is the option of knocking down some Interbus Customs offices and putting up a couple more.