As an Eve player, I expect certain things.


I expect to be able to log on almost 24 hours per day.   There will be times that Eve is down and I will grumble about it. That includes grumbling about downtime during my AU timezone.

I expect to be able to shoot things.  Some things to shoot will be structures, some will be red crosses, some will be other player ships and pods.  I hear that some players even shoot rocks.  There will however be times that I will need to travel a long distance to find my particular form of target.

I expect to be hunted. I expect that if I do everything right, I will get away many times.  I will be elated when I get away, and devastated when I don't.  I expect those hunting me to have 'complementary' feelings (in that if I am happy - they probably are not.  If I become devastated, they are probably happy).

Some days I expect to be bait and you to try to take me down.  If I am better on the day, I will be avenged and you will lose more than I do.  Other days I will fail.

I expect to have opportunities to make ISK, even if I am sometimes bad at it.   When I find a good niche I hope to make a lot of ISK.  As a side note, I prefer my ISK 'indirect', and prefer loot that needs to be hauled rather than ISK to be put directly into a wallet.

I expect a place to live in game.  I expect to be moved along sometimes.  I expect in turn to move others along at other times.

I expect a circle of nerf.  If any one style/fit/game play becomes completely dominant, CCP will iterate on it.  Sometimes CCP will over-nerf.  Other times they will under-nerf. (My poor underused Ishtar)

But there are some things I do not expect. If I want the game to be new, shiny and exciting, I know I need to do new and untried things.  I will like some of those things, and will dislike others.

One thing I learned doing PI, if one area is short on a resource, whether due to overfarming or just market changes make it unprofitable, then move to another area.

Some hunters could learn the same things.  With consolidation in null, these regions will become target rich but potentially more dangerous.  Both are good things.
Posted by Foo at 22:51 No comments:

My eve launcher was stuck at 'Initializing'.

Clearing my cache did fix this.  Thanks to Peter Moonlight on reddit for the suggestion

Choose your cog in the top right hand corner. 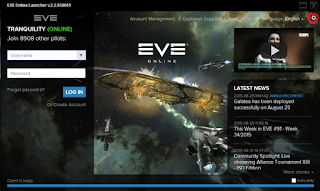 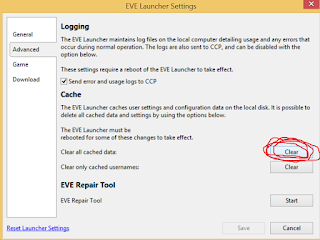 Note: I also ran the Repair tool at C:\Program Files (x86)\CCP\EVE\repair.exe  did something, but did not resolve my issues.

The fancy highlighting is courtesy of my skills in paint on a freshly re-installed PC.  I will get http://www.irfanview.com/ re-installed one of these days.
Posted by Foo at 22:21 No comments:

For a September release we are getting a wormhole polarization timer while on grid. 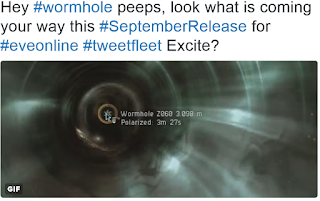 
For those that live in wormholes, this is a big deal.  Yes we currently have work-arounds, including the only use for local in a wormhole (turn your date/time on in the channel), or alt channels where you type in/out every pass.

Email ThisBlogThis!Share to TwitterShare to FacebookShare to Pinterest
Labels: wormhole

Some days you get out 'intact' 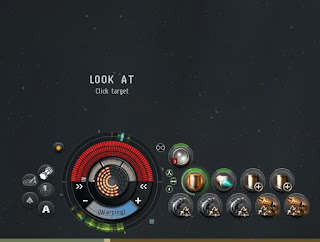 I am the crappiest of PVP pilots.  I am vaguely aware of mechanics like manual flying and transversal and overheating (which I apparently don't do much of).

Every so often, I poke my head out the door.  To be honest, I was trying to get my pod out and was astounded when I took an intact hull away with me.

That is assuming that this hull was considered intact.
Posted by Foo at 21:30 2 comments:

I have lived out of different spaces in Eve. Wormhole POS which is the closest I have had to a home that was mine; Nullsec Outposts that come close; Highsec and Lowsec Stations, and even have run a Highsec research POS for a while.  I know what I like about the different 'homes' and what is a pain.

The CSM have asked what we want out of Citadels.

I am functionally minded.  I may occasionally be caught gawking at a particularly nice ... special effect, but it is not what drives me.  I like functionality, and interesting gameplay.

In summary, I want a home that :

When I think of POS and 'home', I primarily think of C1-C4 wormhole space.  I have used them in other space, but they are not 'home' to me.


I love the flexibility of living in a POS. I love the juggle between defense and industry.  Do you throw together a few industry modules on a throw away small POS with cheap running costs, or do you set up a Large POS with your preferred flavour of defense, and very few - if any - industry modules but 4 times the running cost.  Alternatively, we can set up a juicy target of an industry heavy large pos with few defenses, greater potential reward for different ISK.

I love the difference in POS vulnerability in the different classes of space, a class 1 wormhole (which declines access by battleships or bigger - Nestor excepted), class 2-4 wormholes  and highsec have medium vulnerability to battleships, and class 5-6 plus lowsec/nullsec are subject to to drive by dreadnaughts.

I love that I have a choice of bling. Do I announce that I am a heavy researcher with a hyasoda lab, plan to be here for the long haul with a faction tower, or have lots to defend with faction guns?  Do I try to look bland and vanilla?

I love the idea that I can see when someone 'forgot to pay the rent' (for POS this is haul fuel) and become vulnerable if they didn't do so.  I don't like the idea so much when that person who forgot was me - but so I forgot only once, and got away with it.  Those living in wormholes have seen the too long AFK corp let their POS go dark, and space is quickly freed up by the scavenger class.

I like that hauling is the mechanic to keep POS alive rather than just an ISK sink.  POS fuel is a wonderfully inefficient system, supporting the engagement from miners (whether ice or PI), industrialist to cook fuel, and haulers to move stuff. This in turn supports provides targets for the the ganking class, and the requisite extra attention when refueling.  In comparison, NPC stations are set and forget, and even outposts only need the occasional griffon to defend against trawling.

I even kinda like POS being a little vulnerable.  POS defense is a challenging game, for both attacker and defender.  I probably like it a little more that I have (so far touch wood) been successful.  I liked the times (plural intended) we successfully evicted interlopers in 'my' wormhole, even if the loot fairy was cruel.  Truth be told, I even like it when loot fairies are cruel.

I love being in space, seeing and being seen, while still 'docked up'.

I like that my POS are moderately dangerous to interlopers.   A small group can survive, but a sole scout had better be cloaked if they want to spy on what I am doing.  A troll interceptor can be ignored, but a sole marauder can be a problem.  These are all good things.

I like that POS based storage is moderately secure rather than completely secure.  Whether it can, after eff

POS however have their significant problems.


I can't share facilities with friends or acquaintances.  I want to bring someone into my wormhole, let them refit, compress, refine, research and build at my home.


It is preciously hard to delegate moon mining or reactions to someone safely.  I am comparatively space rich, more than most, and can afford things like POS.  I want to set up a reaction or mining platform, and let someone else control the reactions/mining, but it is hard if not impossible.

I can't securely and asynchronously trade in a POS.  I want to be able to use contracts and market orders.  I want to trade between players.  These tools are much easier to do than what we currently use POS.  There are crude approximations, but the in game tools available in stations are much better.

I cant repackage some stuff. Once a larger assembly array is deployed, it remains unpacked until I use a T1 industrial to scoop and take back to NPC stations.

This post is in direct response to http://www.lowseclifestyle.com/2015/08/csmx-post-22-call-for-structure.html
Posted by Foo at 16:05 No comments:

I have made my PI spreadsheet on google docs more robust.

For those that don't know, I have a google doc spreadsheet that lists the buy and sell prices for PI (planetary interaction) mats at different trade hubs, and also list what is profitable to manufacture on planet based on those prices.  The manufacture profitability is split up in several scenarios: Import all, import some + extract some, or extract all.

Google docs don't like pulling lots of data from eve central (or even crest) on a regular basis.  It works (mostly) ok for the spreadsheet owner, but not so well for other users.  I also have a 'force refresh' option by changing a 'cachebuster' parameter, to insist that I get new prices.

The fix is that I now have 3 'pricing' tabs:
As an end user, you will know whether you are using 'live' (ish) data or how old the snapshot is from the top left corner on the 'Main' tab.

If it is still broken for you, please leave a comment preferably with links to screenshots showing your errors.  If it is working I will already know by the growing number of users keeping the google doc open.
Posted by Foo at 13:16 No comments: