You profit from fixing my 'broken' PI spreadsheet

I occasionally get reports that my PI spreadsheet is broken.

Sometimes it is not working at all as I am fighting with Google itself, which is why it now is cached via http://foo-eve.blogspot.com.au/p/pi-spreadsheet-snapshots.html

But generally it is because the prices are 'wrong'.  I get my prices daily from Eve Central, and take the average prices from Jita, Amarr, Dodixie, and Hek.  I primarily do my PI in a wormhole, and one trade hub is as good as the next, with a mild preference for Amarr (due to ~40% wormholes ending up close to there).

So, there are 2 ways the prices can be wrong.  Firstly my cache of prices can be 24 hours old.  Shrug, you can copy my spreadsheet and change the CacheBuster parameter on the main sheet at A2 to force a price refresh.


Secondly, my price is an average over 4 trade hubs (ignoring no price at all).  If one of those hubs has a price that is wildly wrong, then all pricing running from that will also be (less) wildly wrong.

As of writing this post, my spreadsheet is getting the 'wrong price' for livestock, with an average sell of 145,000 ISK/unit.  The Jita price sell price is 9,500 ISK/unit, and my average buy price is 7,000 ISK/unit.

Both Eve Central and my spreadsheet see the only sell order for Livestock in Hek as 550,000 ISK/unit which by anyone's account is overpriced, especially for a trade hub.  I have no intention of fixing my spreadsheet, as it is working as intended. 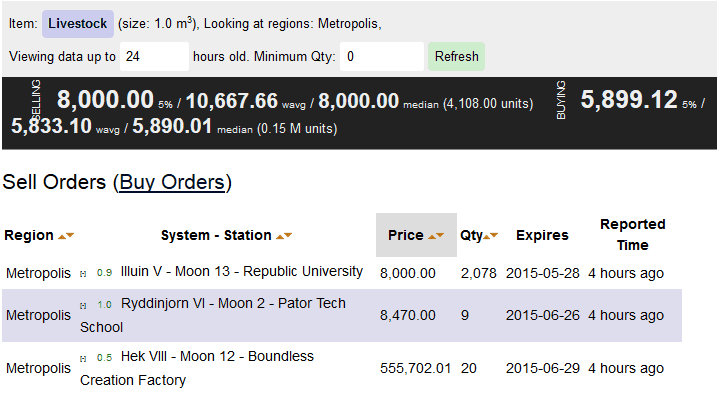 However, there is a good trade opportunity for those wanting to fix the data I retrieve, buying some livestock anywhere, getting red frog/push x to haul it, and selling livestock in Hek.  If you are so inclined, I also note that some of the other trade hubs are also missing sell orders for PI.


Yes, I could fill these gaps myself.  That would involve me spending more time in highsec.  If no one else does this inside of another week or so, I will get some stock sent to Hek, if only to fix my spreadsheet.

Two of the complaints I read about market trading are that there is no way to find things to trade, and how everything always is immediately undercut.  In the third biggest market in Eve ( Dodixie - http://eve-marketdata.com/station.php?step=Rank ), for Synthetic Synapses at least, neither of these complaints are true.

Email ThisBlogThis!Share to TwitterShare to FacebookShare to Pinterest
Labels: spreadsheets in space