You would think that by now, I would know what I wanted my PI planets to look like.

I can find sites and tools for designing ships.  Eve Planetary Planner works well enough; and has a % allowance for links.  I would prefer something that gave a km tool defaulting to a good enough distance between factories.  On a good day, I can get as little as 34km between buildings (or 23 tf; 16MW for a basic link)


I designed a wonderful P1-> P3 planet; that is a planet that took only P1 inputs and produced 2 P3 components every hour, ultimately to end up in my integrity response drone factor 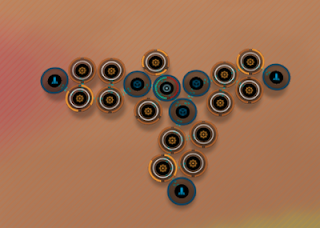 To load this planet, import one set of components into each of the launchpads, expedite transfer them to the storage and then the the second set of inputs is imported into the launchpads.  The 3 sets of 4 factories making P2 components consume 2 components types; one from a launchpad, and one from storage.  The factories then put their product into storage.  The resulting P2 components are fed into the 2 P3 factories (next to the command center).  3 of these planets; each producing a different type of P3 component work in conjunction to feed a single P4 factory making integrity response drones.

Links are based on a chain from Launchpad - factory - factory - storage; with other bits and pieces linking back to this.  I took this image just before shutting it down; to fix the problem described below;  If I had easy access to both P1, and 5 * zero % tax customs offices in low; I would put lots of these up.


My original plan was to have Extraction -> P1 planets, 3 * P1 -> P3 planets (above), and a miscellaneous manufacturing plant that had a P4, a few p3, and a serries of then a P1 -> P4; all running a weekly cycle.  I currently have 6 characters on 2 accounts (and see the day when I get a third account).

Now Extraction -> P1 works really well for a character that has command center upgrade 3 in wormhole space.  1 extractor head, feeding into 1 storage unit.  5 Basic factories pulling resources from the storage unit and in turn feeding 2 launchpads.  For the majority of planets this works.

The problem is that with 'only' 6 toons, each with 5 planets (Interplanetary Consolidation 4) I simply did not have enough planets to do the extraction, the required P1-> P2 factories, and the single P2-> P4 factory.

The 'farming' is fine; but it's a long way to the shops to pick up the extra bits and pieces.  So, off to re-design what I have done.

I like my rough and ready spreadsheets.  Normally I then export what I have completed to a google docs version so it is easy to share; but I am not quite there yet and it still is in excell format.  This spreadsheet has room for 36 extraction planets and about 40 toon/planet/factory combinations.  It then tells me what I have in surplus, and what I am short of.  Well it would if I entered the right data into it. 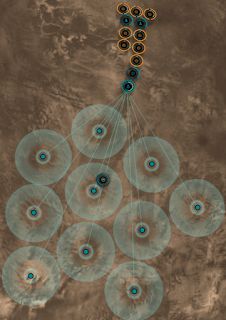 Instead I ended up with a lot of planets looking like this.  A single extractor control unit with 10 heads dumping into a storage unit; with a roughly 7 day extraction cycle.  5 Basic factories feed on the mats in the storage unit producing P1.  I import a complementary P1 and make P2 items with 3 factories.  One of the P2 factories feed off 1 launchpad, a second of the other; and the third gives and takes roughly half from each launchpad.

This has compromises.  I want to fit as many P2 factories on the planet as I can.  For every P2 factory, I need 2 P1 (or basic factories).  I can only fit so many factories with my CCU (command center upgrade) skill at 4.  So, I am left with enough P1 to fill 2.5 P2 factories.  On those few planets I can justify 6 P1 factories, I am restricted down to 1 P2 factory.

Sure, if I broke down and learned CCU 5, it would help, but 2 more months of training per account for marginal benefit seems better spent elsewhere at this point in time, and make do with what I have. 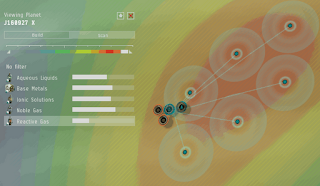 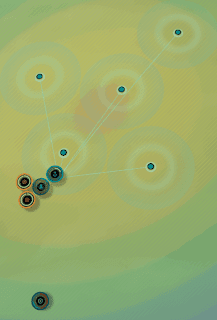 Some planets, even in a wormhole, have less resources.  Both of these are taken from the one planet, centered on two hotspots.  Because I have 2 extractor control units, I can't feed my standard P2 factories.  Oh well, I was heavy on P2 and light on extraction.  The 6 head storage unit gets full quickly, and there is no planet based link between the two sets of buildings.  However, I have made sure I have 0% tax, so can happily use the customs office to easily transfer items between building sets.

Oh and as a final word; make double sure you have factories routed to storage/launchpads, and that the destination has room.  Far too often I have manufactured goods sending them straight into the void; losing not only finished goods but also the inputs material.
Posted by Foo at 22:27