What are buyers looking for in a wormhole system?

This is the same question as what ship does Joe Blogs want?  Is Joe an industrialist, a newbie, a bittervet?

There are different types of wormhole.

Wormholes come in different classes : C1 (easiest) to C6 (hardest).  My personal experience is mostly in a C2 system, and we have travelled through quite a few C1's in our time.


For more information about what to expect in a wormhole, including site difficulty and typical statics, look at http://talocanunited.com/wordpress/about-wormholes-classes-of-wormhole/

Newbies, semi-casuals, and those that dabble in reactions want a highsec static.  That is, a wormhole system that will always have an exit to 'safe space'.  These are C1 to C3 wormholes.  You are more likely to have a highsec static in a C1 than a C2 or C3.

PVP'ers of any kind want exits that are not safe space.  Small group PVP'ers may want a 'C2' wormhole with a null/C5 static.  Large group PVP'ers might like a C5 system, with dreams of taking on a C6 system.  One does not simply walk into Mordor a C6 system,  though a fleet of 100 battleships and dreads would probably do it.  The problem in selling a good PVP system is that while industrialists are by training OK at logistics, PVP'ers are generally not (though there are some notable exceptions)

More experienced wormholers know that highsec static's mean more pesky highsec intruders.  There are more of them than there are of us (even the hostile kind of us).  Unless you have something specific in mind, the added bother of finding a way to highsec is often considered worth it.

Some regular readers may have noticed that I seem to have a consistent theme : planetary interaction.  I prefer a lot of varied planets.  I want to make any kind of planetary interaction item out of a single system; the transport is a pain.  (That said, we do import the cheapest P1 items rather than farm them ourselves).  Gas and Barren planets are everywhere and somewhat boring.  What excites me is the other planet types.  I want to look at eveeye, type in the system name and see a green P4 Prod tick 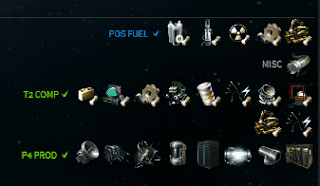 However, a PI farmer will also want some access to highsec.  I don't mind a C1 or C2 static as I can get to highsec from there easily enough.  As a PI farmer, I would not enjoy only having a null static.

Failing that, getting the blue POS fuel tick is a bonus. Logistics is a pain.  Being able to make stuff rather than haul stuff is easy; even if you don't bother to bash down and replace the horribly expensive interbus customs offices.

From what I have seen, the number of existing anomalies or signatures is not a deciding factor.  These things re-generate over time, and can be blown through quite easily.  If we are going to spend 1B on setting up a large POS, with 1/2 of that per month in fuel, we are taking a longer term view.  It will make a difference to some, but has not been a question I have seen asked.

Good PI, C1 systems with a highsec static, no bad effects : Ask for the moon.
PVP systems (i.e. lead into other places to get fights); by all means try.
Poor PI, black hole c4 with a c4 static?  Umm.  Good luck.  Someone might want it for the PVE.