I hear that dreadnoughts can break an Interbus (NPC) customs office in less than an hour.


Customs office in a low level wormhole system bashing is like breaking into a bank ... with sandpaper.  Being left alone with a lot of sandpaper, and you will probably break in.  You will not always be left alone.

The capacitor regeneration formula (with caveats) can be found at http://wiki.eveuniversity.org/Capacitor_Recharge_Rate

I have read somewhere (citation needed) that this applies also to shield regeneration, and found a slight variation (citation needed) on the above formula.  In-game experience from excessive use of breaking into banks with sandpaper suggests that this is correct. 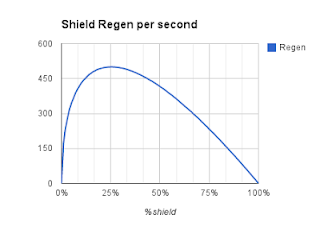 The numbers behind the above graph of shield regen per second are from my google doc at https://docs.google.com/spreadsheet/ccc?key=0AlHsU_rOxWl4dEw2cjZ6Z3BOWDZqbjVpY3ZBWE1Tb3c#gid=1

Yes, you probably should be at keyboard, and aware of your environment.  Are you going to check dscan every 5 seconds for 4.5 hours?  I can't.  I have tried, and am not capable.  Are you going to reload ammo every 10 minutes over 4.5 hours, when required?  Again, I have tried, and I can't.  I failed on a customs office bash because I tried.  Capacitor stable, lasers with T1 ammo and drones do not require ammunition, and will shoot until the earliest of a gank; successful bash; or downtime.

If you can not bring more than 500 dps, don't bother doing a customs office bash.  It is possible with 750 dps.  Possible does not mean quick.

My customs office bashing ships have the following characteristics:
Your pilots shall not have expensive implants, nor shall they have so many skillpoints you would cry at updating their clone.  Your pilot should have up to date clones.

Your decision on what class of ship to fly weighs your estimation of how much damage you will do before being ganked or coming back to keyboard vs your wallet.  Higher DPS means less time, means less chance of being ganked.  Higher DPS also means more expensive ships so you will feel the pain of a gank more.

Customs office shields do not regenerate during a standard downtime.  They do regenerate over some extended downtimes.   I have personally seen both behaviours during various customs office bashes.

Setting up an open move fleet means that the last one awake/online can become boss and warp the fleet home.  We think. There was a problem during a recent bash where we deliberately gave 'boss' to someone who we knew was going to be awake.

In a post coming soon, I will discuss the differences between an npc customs office and a player one.


One could almost determine what I am doing in game by looking over the last few posts.
Posted by Foo at 08:00

Email ThisBlogThis!Share to TwitterShare to FacebookShare to Pinterest
Labels: wormhole