Dotlan summary of the war

Dotlan has a few nice tools to watch the ebb and flow of the war.


http://evemaps.dotlan.net/sovereignty/live shows the systems that have fallen in the last 2 days in a 'Flag waving' perspective.  For all the talk that 'who wants to own sov?', the answer is plenty.  Player groups like their flag on the map.  Now some systems temporarily are missing Territorial claim units but I think that is because given a choice of importing ships or flags, players are moving ships.

Sov changes are actually a trailing indicator of power as sometimes the battles leading up to sov transfer have already been decided, and the flag planting is the formality coming later. Think 'Tenal' falling to Drone Walkers.

http://evemaps.dotlan.net/outposts/freeports shows the number of Free ports.  Any time an outpost is taken, it undergoes 2 days of being in freeport mode.  That there are currently 31 freeport outposts is remarkable.  By the time you have read this post it will change but there is still a lot of activity.

http://evemaps.dotlan.net/corp/movements shows the player movements.  Obviously, a large positive movement is a healthy sign, and vice versa.  Alliances, especially PVE ones, are under stress, and alliances are feeling the stress.  From what I have seen a large drop is either because the alliance has been smashed, or that there is a change in direction within the alliance and some are unhappy.  This especially applies to alliances on the front lines or have been swept over by the war.

Coalitions are being made and remade on a daily basis.  In my opinion, this war will set boundaries and the style of game we will be playing over the next 2 years.

Some players will flock to the strong, supporting a renter style arrangement for years to come.

Some players will take advantage to break out on their own.  Groups will say 'no more', and burn down the old renter space.

Some groups are obviously looking 'post war', at what the landscape will be with a lowsec based Goonswarm and no CFC.  They want to make sure peasants do not become too revolting. All some of those groups need to do is deny access to jump routes.  Shadow of XXdeath / Brothers of Tangra spring to mind, with the most to lose if renters decide they don't need to rent anymore.

Some will thrive on the stress.  Some (like me) will log on because internet pixels are important. Some will log off and wait for the wind to blow over.    Eve however is very much alive. Online Player count is up. 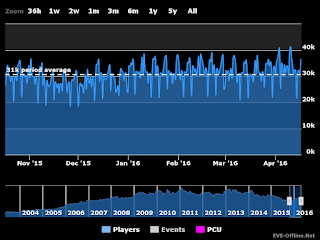 As pilots you have a choice.  There are boundaries to break and remake.  For me, I have taken a liking to the semi-AFK Entosis Blackbird.

Email ThisBlogThis!Share to TwitterShare to FacebookShare to Pinterest
Labels: WWB