I was trying to follow this advice with L2 distribution missions.  I have received better advice, both in game, and as a comment on this blog; especially for a newbie player with low standing.

Is what you are doing earning a decent standing with your required faction, corporation or agent?  Character Sheet -> Standings -> right click and show transactions for who you are trying to raise standing with. 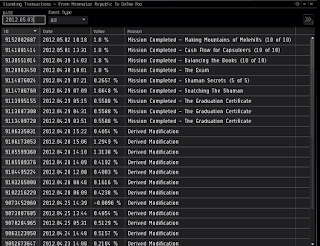 Data center missions can be found at http://wiki.eveonline.com/en/wiki/Data_Centers.
Per faction, there are 3 graduate certificate missions, and a series of Keeping Crime in Check missions requiring you to gather pirate tags.  You can do all 3 graduate certificate missions, and one follow up series.  From the previous link - Caution: Farming 10 tags can take over a week. Do not accept the mission unless you have enough money to buy the tags.  Personally I would recommend not even talking to these agents until you have your tags.

The starting agents are in space.  I had been trained to look for agents in stations and spent some time not even finding a station.  Warp to the data center and then you can find your agents.

Place buy orders for tags when you realise you might do the missions.  There appears to be a very wide spread between buy and sell prices.  You also may do better buying tags outside the zones (e.g. Serpentis copper tags were being sold for 400,000 in Galente regions, but 40,000 in Minmatar regions)

Edit: Despite there being 3 copper tags missions; it appears you can only hand them in once per faction.  Also the copper tag missions require 3 tags, the rest require 20 tags.

Doing the data center missions above you have started some Cosmos agent missions; but there are more.  Eve wiki has pages for each faction's cosmos agents.

You should have completed these once already.  I let a couple of mine lapse thinking starter missions can't be worth that much.  The starter ISK is useful; the standing boost is fantastic.  There are 3 of these per faction.

A list of starter missions, their rewards,  and the source systems is at http://wiki.eveuniversity.org/Tutorial_and_Career_Agents_in_Eve

Also, just in case - if a mission calls for a civilian widget and you have a real widget; strip your real one and put the civilian one in.  On one of the missions (sorry I don't remember which one), I could not scan? decrypt? salvage? with the real unit and had to dock and fit the civilian equivalent.  For all subsequent missions - I just use the civilian options where available.

For newbie ISK, place low bid orders for the rewards (also on the link above).  Many players (including newbies) will sell to the most convenient seller.  I have purchased many ships well below unskilled reprocessed value.

These missions are also much easier to do in a Destroyer than a Frigate; the additional high slots help.

Do the missions for your allied faction (eg Gallante/Minmatar); there is derived standing gain from doing your allied faction's missions.  For me currently this is about 60% but the number is changing based on something  - but there are slowly diminishing returns.

When doing the starter missions for your allied faction - either learn Frigate 2 for that faction, or take a couple of surplus frigates with you; some missions want you to blow up your current ship.  You may also want to take some Velspar, Tritanium, Cap Booster 25, Mining lasers, weapons and ammunition.   My original Gallante starter system was well supplied on the Market.  My first Minmatar starter mission system was far less so.

I  still spend to long per faction standing point, but playing smarter not harder has worked.

Email ThisBlogThis!Share to TwitterShare to FacebookShare to Pinterest
Labels: Standing