I like the idea of passive income.  I am prepared to put a lot of work into not needing to do work.

While I was working on Planetary interaction, I was also training research, but in game and out of it.  Go learn some skills to Level 5, have standing, turn up at the agent.  Easy ISK.  Umm; not quite.

The usual suspects give information:

And for me - some new suspects:

Note: A lot of older pages talk about lotteries for Blue Print Originals (BPO).  These no longer occur.

Based on my research I have the following guidelines, for a single research agent.  (Any errors are mine, please leave a comment)
When choosing a field, choose a profitable but convenient one.  There is little point grinding standing or purchasing a 10M skillbook to get 1K per datacore.  This is where http://hussars-online.ru/eve/datacore.php came in handy. 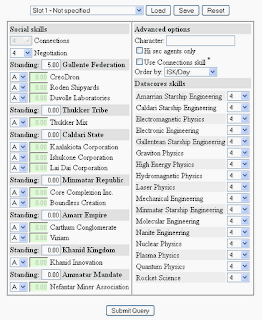 Without even having required skills, I simply chose 4 for every skill (not too hard to get) and forced it to consider every agent.

I am not entirely sure I agree with the number of datacores/day numbers, but it still suggested the pick of the agents and research.

I could also use eve central - but there are a lot of data cores to compare.  The in game market works too, but I do a lot of research away from an eve session.

Once you have chosen your field(s), confirm your agent's standing requirements.  They *should* be per the table above, but in game information trumps something some guy wrote on the web. 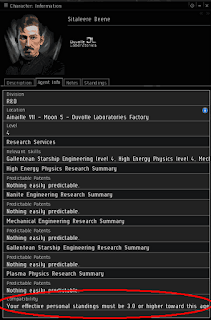 To get an L3 agent with 5 Faction standing and Connections 4, you only need raise your raw standing above 0 to get your corporation standing to 1 (i.e. if you have not upset them then a single mission gives you ~ 1.6 standing)

To get reputation for the L4 agents, I have been grinding L4 distribution missions as I had faction reputation over 5.  It took 25 L4 distribution missions with Social 4, Connections 4.  '3.00' standing was not enough to make the research agent appear in my agent finder as available but 3.03 was enough.  I assume I was just under with a rounded number on the display but the agent was 'strict' about being 3 or more.

Most research corps do not offer security missions.

Even then, to finally get access to the agent, I had to log out and back in again.

This did leave me with two storyline L4 security missions that I am not sure what to do with.  I'll be fine doing these solo with my Catalyst (destroyer) right? (that was sarcasm)

Time to grind 25 L4 distribution missions vs agent reward for those same missions.  Call this neutral.

There was some trivial time cost and time to learn per-requisite skill, as well as 10M Isk to learn Nanite engineering, plus most of a week training it.

With my chosen L4 agent, having 4 skill, I will get 6 datacores a week passive income, plus (I think) another 6 if I do a rather trivial daily mission.  I was surprised at a 10K Isk cost, but oh well.


I've read (and have also seen) that the daily mission consists of either a trivial volume courier mission or a small amount of tritanium (9K? for L4).   Leave a fast ship and a load of tritanium in the base for when you feel like doing them; but I would not go far out of my way to get a mission.

Ignoring time (both grinding standing and training), and ingoring trivial costs, call the first research agent 10M.  Lets also call it 280K per 'best' datacore sold (my first one sold for more but let's not rely on that as prices have recently dropped in Jita).  35 Days for return of passive income, then very roughly 9M per month.  If you are around your research agent anyway, you may as well do their daily mission for extra income, but it's not worth going significantly out of your way to get.

Possible future plans for my R&D

I will probably learn  Research Project Management (40M ISK) up to level 4 for a total of 5 agents.  If so, I will also (most likely) learn plasma physics and graviton physics (10M each) for flexibility, having the some fields researched by more than one agent.  I will also need to grind one (or possibly 2) more corporations to 3 standing.

So, for the next 4 agents 60M at (roughly) 280K/datacore, 4 additonal datacores/day; break even is roughly 2 months, then an an additional 36M per month, giving me a total of 45M per month nearly passive income on one toon.
Posted by Foo at 14:50