Goon defense of POCO's in Perimeter

It looks like RVB are coming to the Goons defence, as assistance against D A R K. (from viewing the war in-game).  Rumour has it that Goons and RVB are forming a cartel, and now it looks like mutual assistance pact.

I am an observer, not a participant (at least not yet anyway).

I missed one CO repair effort.

The second had a lot of suspect repairers on field; with opportunistic ganking of those ships.  A few went down. 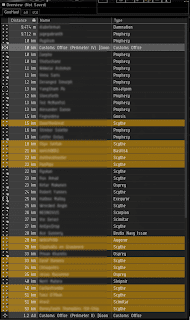 The third CO had only one ship with a suspect flag.  Given the number of ships on field, the single suspect lasted seconds.  A few more ships were involved.